The Stop Vax Passports Task Force warns the free world about the dangers of digital vaccine passports. These passports—digital apps on a smartphone that track a person’s vaccination status—are a grave danger to medical freedom and civil liberty.

The task force has shown how the seemingly innocuous technology behind digital health apps and passes can easily be transformed in a matter of minutes into a Western model of the Chinese Communist Party’s social credit system used for mass surveillance, tracking, control, and punishment. The digital medical passes are indeed a gateway to mass surveillance as shown in a program by that title produced by the group in July.

Even as most areas are rolling back mandates—and people are enjoying more freedom—there is a growing willingness to enable these dangerous vaccine passport technologies in Republican-led states that had previously rejected mask and vaccine mandates. Now referred to as “SMART Health Passes” or other names, any app on your phone that tracks your vaccination status is indeed a vaccine passport, regardless of what it’s called.

“Several Republican-leaning states that eschewed so-called vaccine passports over concerns that they limited freedom are now embracing the technology behind them so that their residents can travel and get their immunization and health records online.

The technology—which allows proof of Covid-19 vaccination to be digitized and often includes a QR code—had been touted by supporters, largely in Democratic-leaning states, as a way to facilitate safer reopening after pandemic-related shutdowns.

But now the technology is gaining momentum in at least five states—Arizona, Mississippi, South Carolina, Oklahoma, and Utah—despite bans on “vaccine passports” or governors opposing them.

The states see the passports, which often include a scannable black and white square of code, as a way to facilitate travel to places that require proof of vaccination and give residents easier access to their records through a more nimble digital format.”

These digital vaccine passports are not an innocent “way to facilitate travel…through a more nimble digital format.” Rather, in the wrong hands, they can be a potent tool of mass surveillance and totalitarian control through which citizens can be denied access to their bank accounts (as we saw in Canada), face job loss, be restricted from free association and travel, and censored on public platforms.

“Don’t be fooled when these elected officials tell you it’s ‘not really a vaccine passport, it is just a digital health card’ etc.,” says Reggie Littlejohn, co-chair of the Stop Vax Passports Task Force. “It is semantics. THEY KNOW the term vaccine passport is radioactive, so they’re calling it something else.”

The Stop Vax Passports task force task force is co-chaired by Frank Gaffney, vice-chair for the Committee on the Present Danger: China, and Reggie Littlejohn, Founder and President of Women’s Rights Without Frontiers.

WHAT: ACT NOW! Send an email telling YOUR elected federal and state legislators and your governor to reject SMART Health IDs and Digital IDs (a.k.a. Vaccine Passports) using the simple advocacy tool at StopVaxPassports.org 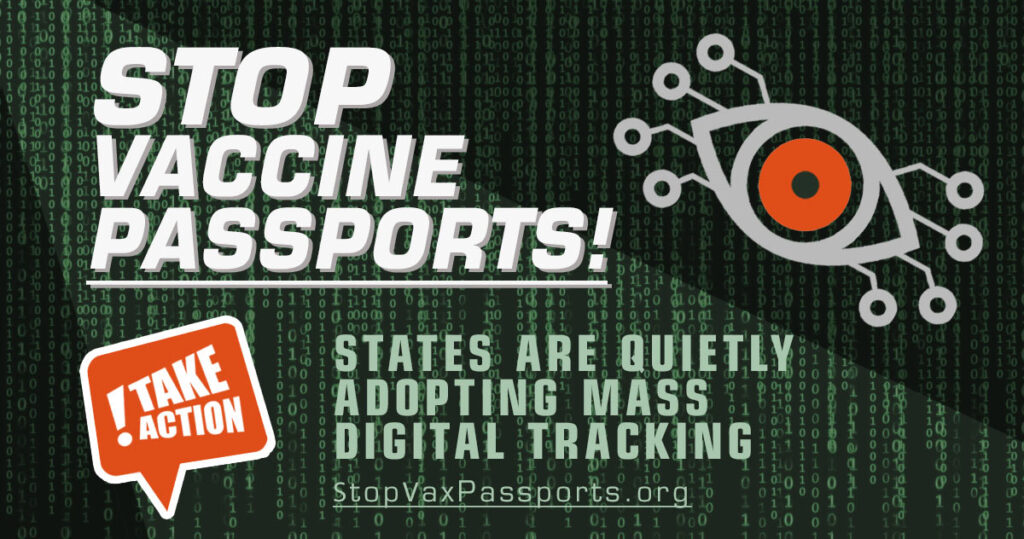