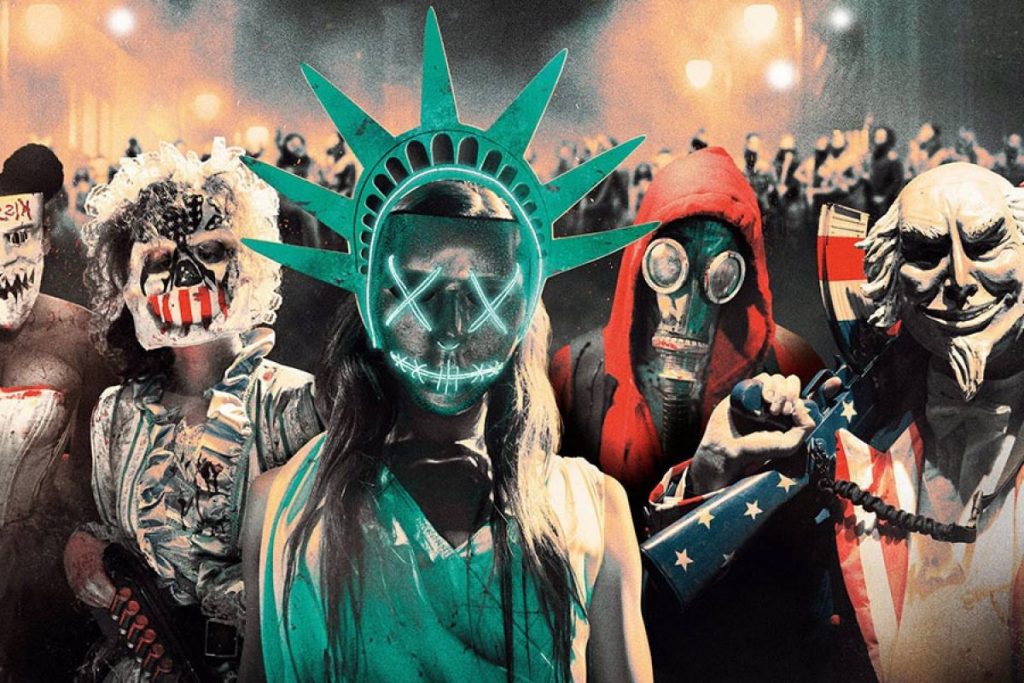 “The Purge” is a movie about a fictional future in which crime is legal. It was intended to be a diversion, a horror film, which would scare and entertain viewers before they returned to their lives in the real world. That real world may soon no longer exist. We may all live in The Purge all the time – very soon. America’s large cities are already experiencing massive crime increases. Cities like Chicago are shooting galleries. Last year the United States experienced the largest annual increase in homicides in its history. The national murder rate jumped 30%.

Those statistics may soon look like the good old days. Undeterred by the rising chaos, American cities are now getting ready to fire their police officers.

Chicago has imposed a vaccine mandate on its police officers. Anyone who has not complied with the mandate by today – October 15, 2021 – will be fired. The head of the police officers’ union has called on union members to refuse to comply.

“Do not fill out the portal information,” Chicago Fraternal Order of Police President John Catanzara said.

“I’ve made my status very clear as far as the vaccine, but I do not believe the city has the authority to mandate that to anybody — let alone that information about your medical history.”

“It’s safe to say that the city of Chicago will have a police force at 50 percent or less for this weekend coming up,” Catanzara added.

Over 500 people have already been murdered in Chicago this year. The number of shootings every month is in the hundreds. Chicago is a war zone with the police on duty. You can imagine for yourself what happens when half the force does not show up for work.

Seattle has set itself on a similar suicidal course. The city has been losing police officers in large numbers for some time as the result of its policies, which favor criminals and handcuff law enforcement. Now the city is poised to fire about 40 percent of the 1,000-person force, for failing to get the COVID vaccine. The deadline for officers to show proof of vaccination is October 18, 2021.

A total of 292 officers had yet to provide proof of COVID vaccination as of October 6, 2021. Another 111 officers have pending exemption requests.

In response to the looming crisis, interim police chief Adrian Diaz recently ordered the department to move to Phase 3 mobilization status. This emergency status dragoons all sworn law enforcement personnel including those riding desks and filling supervisory or support positions into working the street. Call 911 in a few days, and you are likely to have the guy from the evidence locker or the desk sergeant show up at your door. Assuming anybody comes at all.

“Stage Three Mobilization
Stage Three Mobilization describes the third level of mobilization for emergency operations under these conditions:
– The Department has received a specific threat to the City of Seattle supported by one or more incidents (locally, regionally or nationally) that has the potential to cause significant harm, property destruction or wide-spread public fear; or
– The resources mobilized in response to a significant incident(s) cannot establish and/or maintain public order.”

CodeBreaker on Twitter: “‘Lawless in Seattle?’: KOMO News town hall focused on city’s crime rate, solutions https://t.co/Kr12xRNG6R I can tell you what your problem is…..It’s NO Police!! You don’t need social workers, you NEED, POLICE!!!, and MORE of them. PLUS, you need to punish offenders!! / Twitter”

‘Lawless in Seattle?’: KOMO News town hall focused on city’s crime rate, solutions https://t.co/Kr12xRNG6R I can tell you what your problem is…..It’s NO Police!! You don’t need social workers, you NEED, POLICE!!!, and MORE of them. PLUS, you need to punish offenders!!

In Los Angeles, the sheriff has acted to head off any similar action. He has simply served notice on the city that he will refuse to enforce their vaccine mandate, which will go into effect on November 4, 2021.

“I’m not forcing anyone,” Sheriff Alex Villanueva said Thursday. “The issue has become so politicized. There are entire groups of employees that are willing to be fired and laid off rather than get vaccinated.”

“I don’t want to be in a position to lose 5%, 10% of my workforce overnight on a vaccine mandate,” Villanueva continued.

In Massachusetts, the State Police are simply voting with their feet. At last report, hundreds remained unvaccinated and dozens had already submitted their resignations. Many of those intend to go to work in other jurisdictions that do not require vaccines. A vaccine mandate for all State Police goes into effect on October 17, 2021.

“To date, dozens of troopers have already submitted their resignation paperwork,” Michael Cherven, president of the State Police Association of Massachusetts, a union that represents about 1,800 officers, said recently. Cherven also noted that the State Police in Massachusetts were already “critically short-staffed” and had been forced to cannibalize units dedicated to “homicides, terrorism, computer crimes, arsons, gangs, narcotics, and human trafficking” and return them to uniformed patrol

Jerry Ostergaard on Twitter: “Eye-popping graphic in this op-ed; Chicago’s murder rate used to be similar to NY & LA, but has risen higher https://t.co/hZ0SteWCW3 pic.twitter.com/4PqkCXmXnD / Twitter”

Eye-popping graphic in this op-ed; Chicago’s murder rate used to be similar to NY & LA, but has risen higher https://t.co/hZ0SteWCW3 pic.twitter.com/4PqkCXmXnD

If you live in a major American city, you have likely already accommodated yourself to your new, more dangerous reality. What is about to happen will be qualitatively different. The police are, in many jurisdictions, simply going to vanish. You are going to be on your own.

Last year we saw burning and looting on a historic scale. That was with fully manned police forces doing their best to contain the violence. Now we are stepping into the unknown. Now we are going to see The Purge become reality.

Read more at AND Magazine